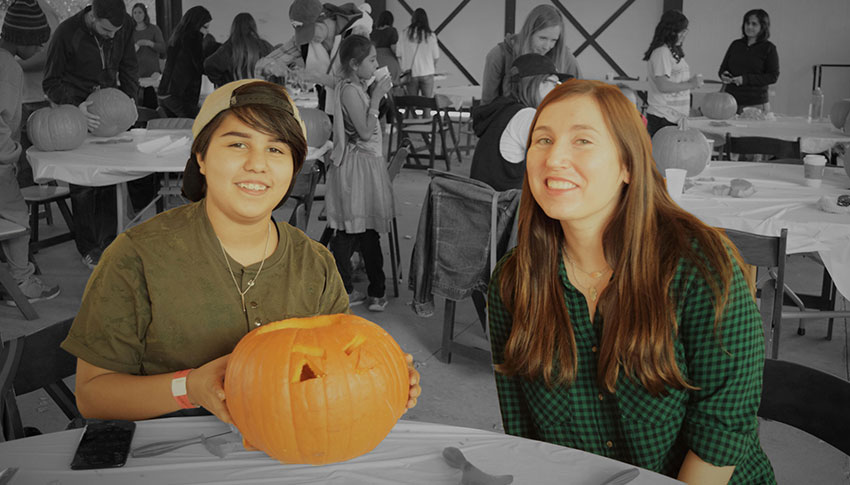 Bigs aren’t the only ones who can be role models. Little Brother Miles is a Human Rights Campaign (HRC) Youth Ambassador and is a role model for LGBTQ youth all over the country. He spoke at the 2017 “Time to Thrive” conference as the youngest of the 15 Youth Ambassadors.

After his speech, kids gathered around him to take photos. “I felt like because I’m a younger kid, that because I’m still going through high school, for the kids that look up to me as a Youth Ambassador, I’m more relatable,” he says.

Having a relatable role model is so important for kids, especially LGBTQ kids, Miles says. Since Miles began his process of coming out at age 11, he’s experienced what a lot of LGBTQ kids experience – kids at school bullied him, and his family struggled to understand him and his identity.

“My whole middle school career was getting bullied every day no matter what,” Miles says.

Miles persisted at school and insisted that he be called the correct name and that students and teachers use he/him/his pronouns. He even advocated for the sex-ed curriculum to be more inclusive of LGBTQ identities.

“Having a person who is a little bit older, who has gone through life, who can see you as a person, and how you identify yourself, having that person is not only validating, it’s comforting.”

With his family, Miles still struggles. “I am the first person to come out in my family as queer—the rest of my family is cis and straight, and it’s hard. Nobody in my family understands how hard I have it.”

Miles does have a lot of great adult role models in his life now, including at the Colorado LGTBQ community center Rainbow Alley, through HRC, and his Big Sister, Ava. Ava submitted a recommendation letter for Miles to become a Youth Ambassador and attended HRC’s Time to Thrive conference with him and his mom. Ava was also the one who connected Miles with Rainbow Alley, which gave him a safe space to be himself.

When Ava and Miles were first matched, Miles was just starting his coming out process, and had not identified yet as male. When he first started coming out, he didn’t hesitate to talk to Ava about it. He knew that she accepted him unconditionally, which was something he did not always feel from family and friends.

“Having a person who is a little bit older, who has gone through life, who can see you as a person, and how you identify yourself, having that person is not only validating, it’s comforting,” Miles says.

Miles and Ava have stayed close through the three years they have been matched, and she says it’s easy to see how he’s grown as a person.

The role of a Big isn’t to provide parenting, she says, but to listen and affirm. “Just be patient and don’t assume things, be curious about their identity, because they probably have enough people telling them who they are and how to be.”

When Miles grows up, he hopes to work as an advocate for LGBTQ people, to continue to be a role model. Because of the work he’s done in coming out and sharing his story, he says, he hopes that what he has gone through will create a safer, more accepting world.